Incoggo seems to re-launch itself a few days after I quit the application, why is this?

This is expected behavior for the application!

Incoggo has a default auto-restart feature to ensure that the application restarts and continues running in the background, even in the event of a crash.

To change this setting, select the System option in the dropdown menu, then hover over Advanced. You can change the setting under Automatic Relaunch by clicking DISABLE; once it reads Automatic Relaunch: DISABLE , you’ll know that the change has taken effect and Incoggo will not auto-restart. 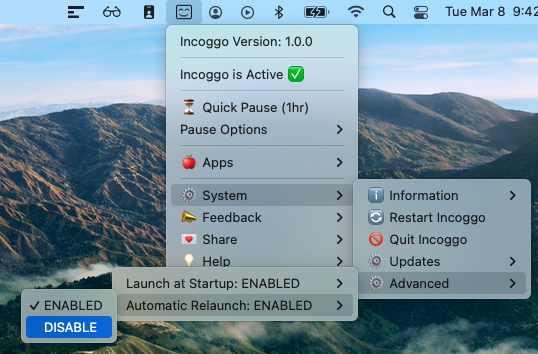 If you’d like to turn Incoggo off and make sure it stays off, simply click the Pause Indefinitely button in the dropdown menu. This will disconnect Incoggo from your system proxy settings and free up system resources from the application.

After clicking Pause Indefinitely, Incoggo will stay ‘off / paused’ until you click Reactivate Incoggo in the dropdown menu.

What’s the proper way to uninstall the app, including removing the root cert?

If the install process is never finished, simply removing the app from the applications folder (i.e. deleting the .app and .dmg files) should fully delete the app and all related resources from the computer.

If the install process has been finished, the correct way to fully remove the application from a computer is to run the uninstall script as detailed here: How do I uninstall Incoggo?

Running the uninstall script will fully remove the app, all related resources, and undo any system modifications (including sudoers changes, etc.), reverting the system to its ‘original state’.

There is a small bug where the script won’t remove the root certificate completely right now, (this has been fixed in an upcoming patch - I’ll update this reply), but it does delete the certificate’s .key file, which is only ever generated / available locally. For the time being, the certificate itself can be manually found & removed via the Keychain Access application, it’s named incoggo_ca. EDIT: The uninstall tool will now also remove the certificate; running the tool completely removes any & all changes made by the application.